The mobile industry is an ever-growing market that has had an unfathomably positive impact across the globe. The traditional smartphone device acts as a gateway to the digital realm, which in result enables an increasingly interconnected society. It is both a technological and societal revolution that has witnessed an unprecedented pace in growth, with adoption even in the most under-developed parts of the world. In fact, according to GSMA Intelligence, as of 2017, there were over 5 billion unique mobile subscribers across the globe- far more than the number of people that own household computers. The mobile device has grown to be the most basic and convenient point-of-access to the World Wide Web, and the apps that have been built around it.

The multi-billion dollar cryptocurrency industry has grown to be a technological and social revolution of its own sort- which largely aims to put control of money in the hands of the people, as well as decentralize and digitize everything possible within the service industry sectors. This goes perfectly hand-in-hand with mobile adoption, as the barrier of entry into the cryptocurrency industry suddenly drops to the most basic of smartphone devices.

The Bismuth platform does not fall short in this category, as the project is currently making unprecedented strides in releasing the first native mobile wallet Bismuth which will put a wallet, then dApps and virtual services in the hands of anyone with a smartphone device.

Until then, tech aware users were able to install the Tornado wallet on their android phone. The process is documented and the resulting wallet works fine on recent smartphones.
However a simple an effective wallet, available both for Android and iOs, is an entire new thing. 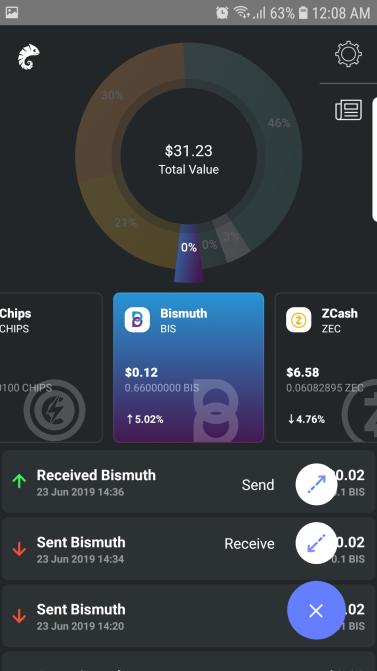 That mobile wallet was made possible thanks to the newly announced ecdsa addresses Bismuth does now support.
The Chameleon wallet exclusively uses these addresses, generated from a seed phrase. Still, you can send and received $BIS from and to legacy address in a completely transparent way.

Chameleon Wallet is available for iOS and Android: