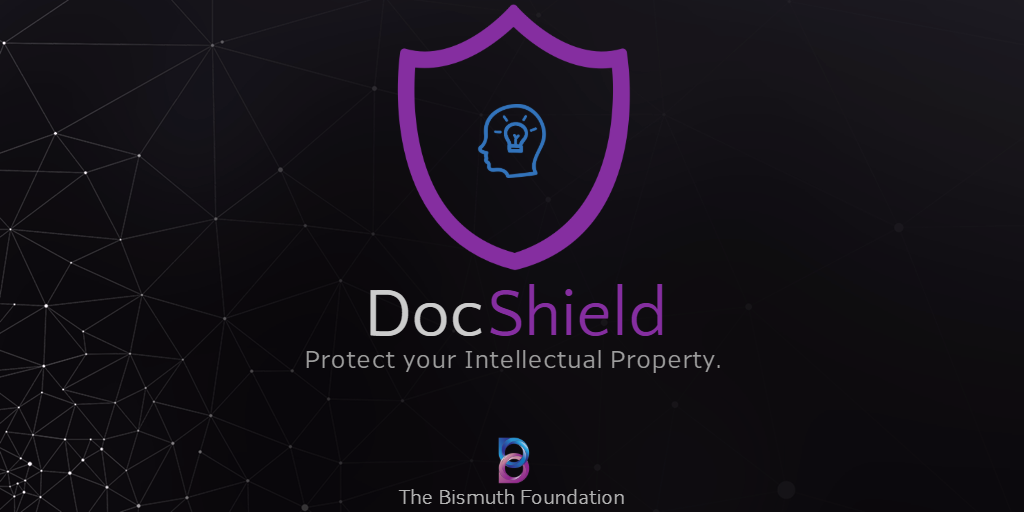 You have just come up with a great, innovative idea, and you have summarized it in a document including some drawings. You have done some searches in patent databases, published journals, conference proceedings, and you are quite confident that no one else has patented or published this idea before. How can you protect your intellectual property?

The normal procedure in such a case would be to start working on a patent application, especially if you work for a large company which has the funding to pay for patent related expenses. But what if you do not have the funding available for this, or perhaps you work for a small start-up company which would rather spend it’s limited funding on developing the idea further and building a prototype system instead? In such a situation you could publish your idea, but that would eliminate the possibility to file for a patent later and it would allow future competitors to launch a similar product. It could also happen that someone else gets the same idea as yours or the idea leaks out of the company, and another party files the patent. In this case your start-up company may be forced to abandon the idea after having spent time and funding working on it.

In the scenario described above the Bismuth blockchain technology comes into the picture. One of the unique aspects of the Bismuth blockchain is the command and data fields which are perfectly suited for securely storing and timestamping almost any kind of information. From the Bismuth whitepaper: “However, storing everything on chain because, there is a chain, is kind of the hammer problem: if all you have is a hammer, you see every problem as a nail. That is why some crypto-currencies are so focused on scalability issues: they want to store everything on chain, and it is just too much. Bismuth’s philosophy is to store only what needs to be stored on the main chain, and no more. Scalability is an application design issue. By ensuring you store only what needs to be, you avoid – from the start – many scalability and long term issues. Why store full documents for proof when you can store only their hash? Store proofs instead of data. Use checkpoints, signatures, fingerprints.”

So what is a hash? Wikipedia defines it as follows: “It is a mathematical algorithm that maps data of arbitrary size to a bit string of a fixed size (a hash) and is designed to be a one-way function, that is, a function which is infeasible to invert. The only way to recreate the input data from an ideal cryptographic hash function’s output is to attempt a brute-force search of possible inputs to see if they produce a match, or use a rainbow table of matched hashes. Bruce Schneier has called one-way hash functions “the workhorses of modern cryptography”. The input data is often called the message, and the output (the hash value or hash) is often called the message digest or simply the digest.”

So, to protect your idea and create a timestamped proof that you had this idea at the current time, you can create a Bismuth transaction including the hash of your document as part of the transaction. If, in the future, you or your company are challenged by someone else claiming that they had the idea first, you can show them your document, compute the hash of this document, and show them the timestamped Bismuth transaction containing the same cryptographic hash. To prove that you are the person who created the document and the associated hash in the Bismuth blockchain, you can just create another transaction agreed with your counter-party using the same account. This would be a valid proof of ownership, since only the person holding the private key of the account can do so.

Another benefit of storing only the hash on the blockchain, is the fact that you do not have to disclose your actual idea. The document containing your idea should be safely stored on a private disk, and you only need to retrieve it again should a dispute regarding the idea arise in the future.

Since blockchains are designed to be immutable, it is very difficult and practically impossible to change the stored transactions once they have been included. Changing a stored transaction would require creating a competing chain with more computational power behind it (so-called hashrate) than the main chain of Bismuth. Such an attack (called a 51% attack) would in practice be difficult to achieve and also very expensive.

How to protect your intellectual property with the Bismuth DocShield Crystal

It can not be expected that the average person is a programmer or able to compute the cryptographic hash of a document and submit this information to the Bismuth blockchain. Therefore, a dedicated add-on (called crystal) to the Bismuth Tornado wallet has been written to aid in the process of intellectual property protection. The Tornado wallet is chosen, because it makes use of secure online wallet servers without having to download and synchronize the entire Bismuth blockchain just for registering a few transactions. The Bismuth Tornado wallet can be downloaded from here (installers for Windows, Mac and Linux): https://github.com/bismuthfoundation/TornadoWallet/releases.

After starting the Tornado Wallet, select an address by clicking on “Manage Addresses”, see screenshot below. Sending transactions on the Bismuth network costs a few $BIS cents. The transaction fee is 0.01 $BIS plus a small amount depending on the length of the message. If you do not already have some $BIS in your account, you need to purchase some on an exchange, for example qTrade and withdraw from the exchange into your wallet. See also https://medium.com/@gawlea/how-to-deposit-bis-on-qtrade-io-a3ba17aeedae 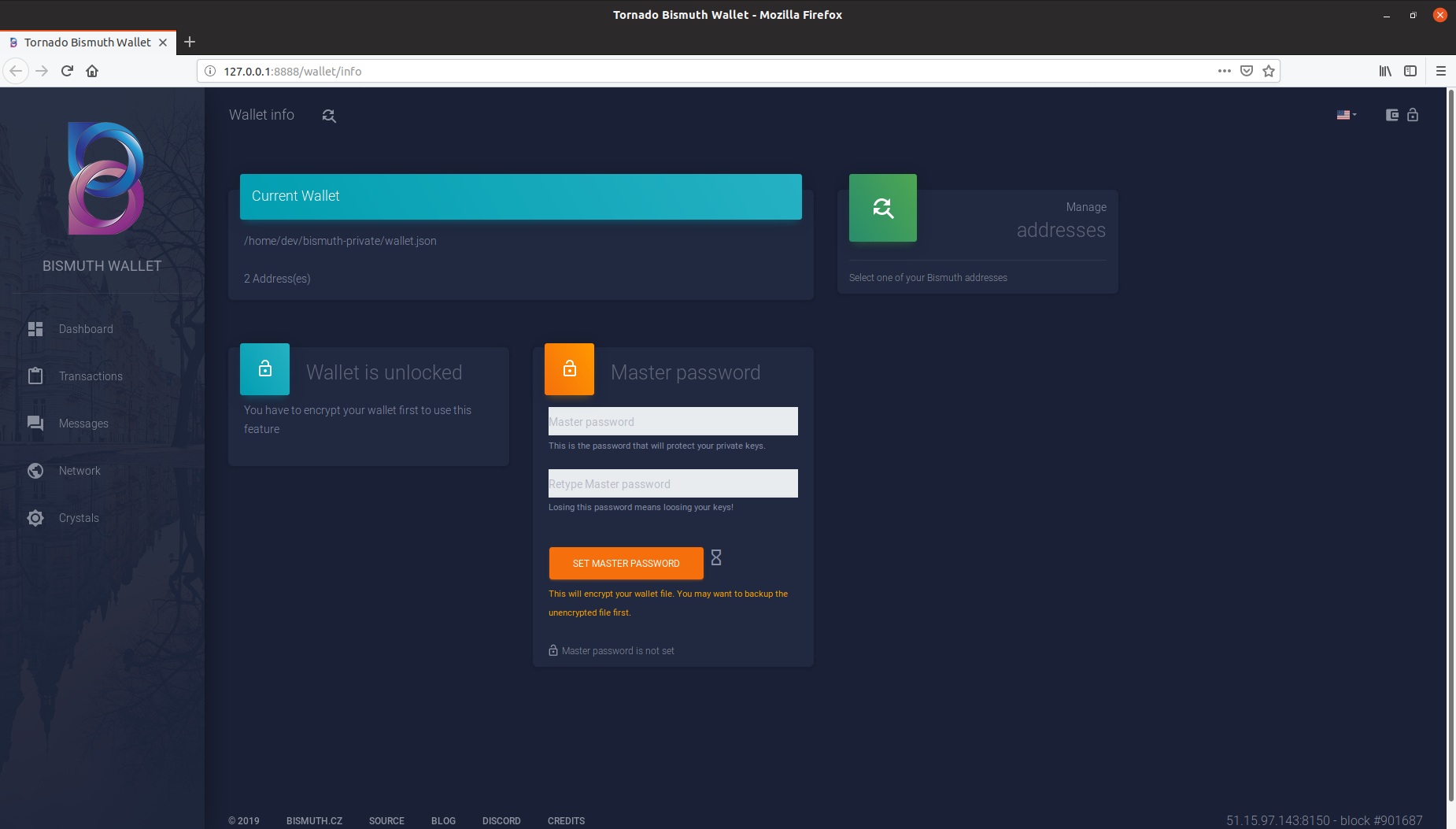 Click on “Crystals” in the left-hand menu and activate the “docshield” crystal, see screenshot below. 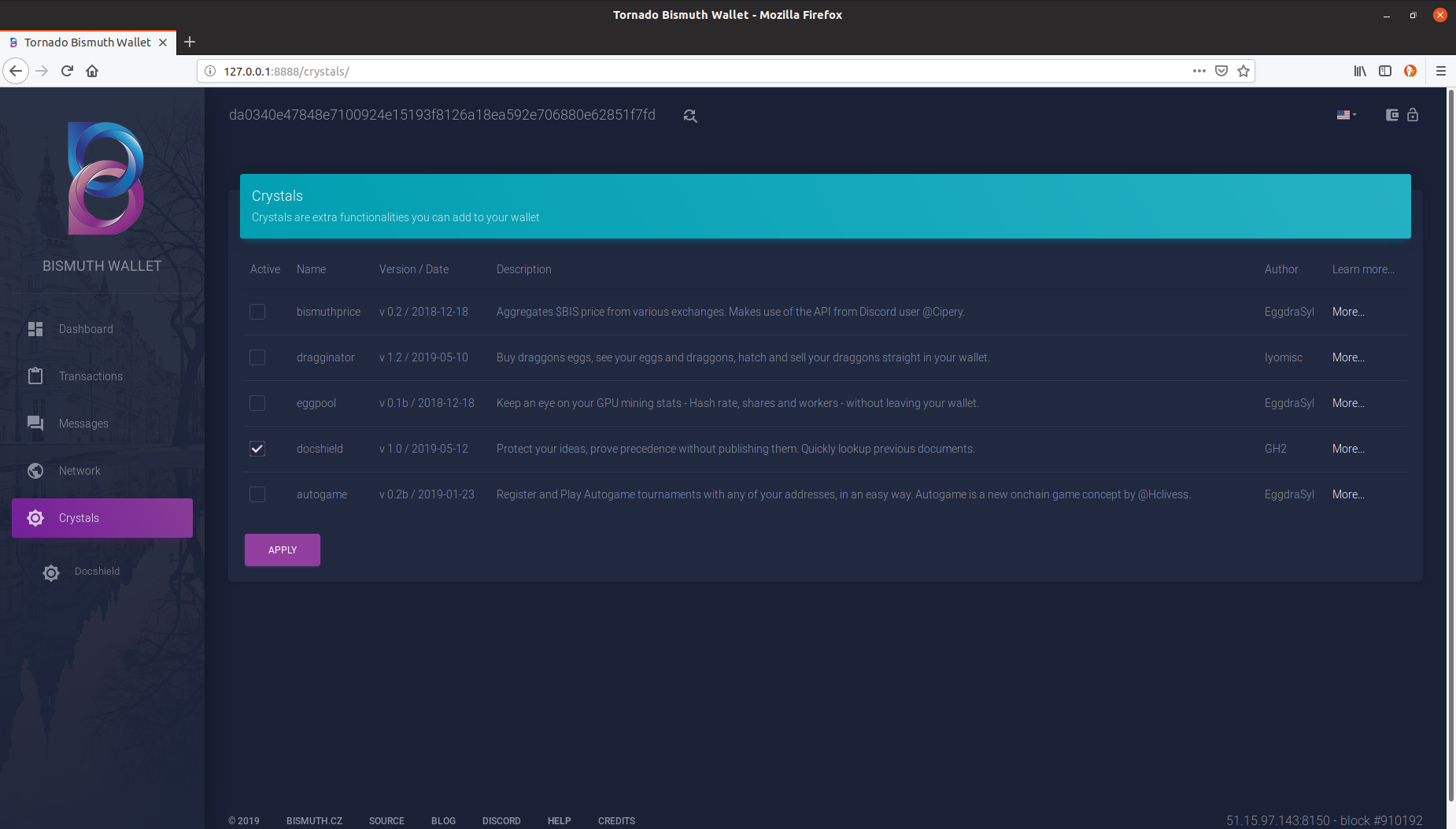 Click on the “Docshield” crystal in the left-hand menu and the following interface will appear. 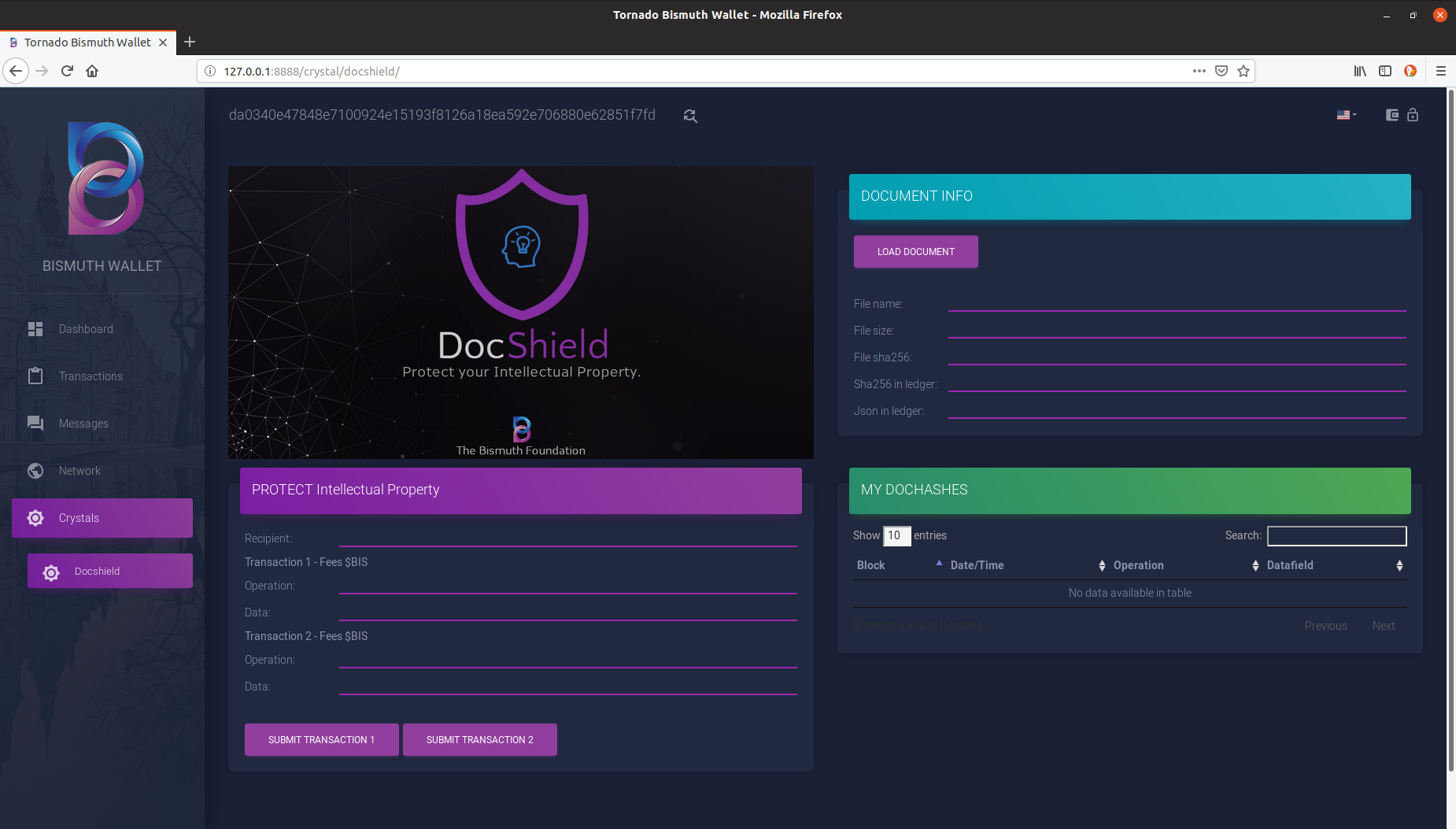 Next, click on “Load Document” and select the document which contains the description of your idea. After having selected the document (in this case the filename is test.txt) the file length and the document hash (sha256) will be displayed. 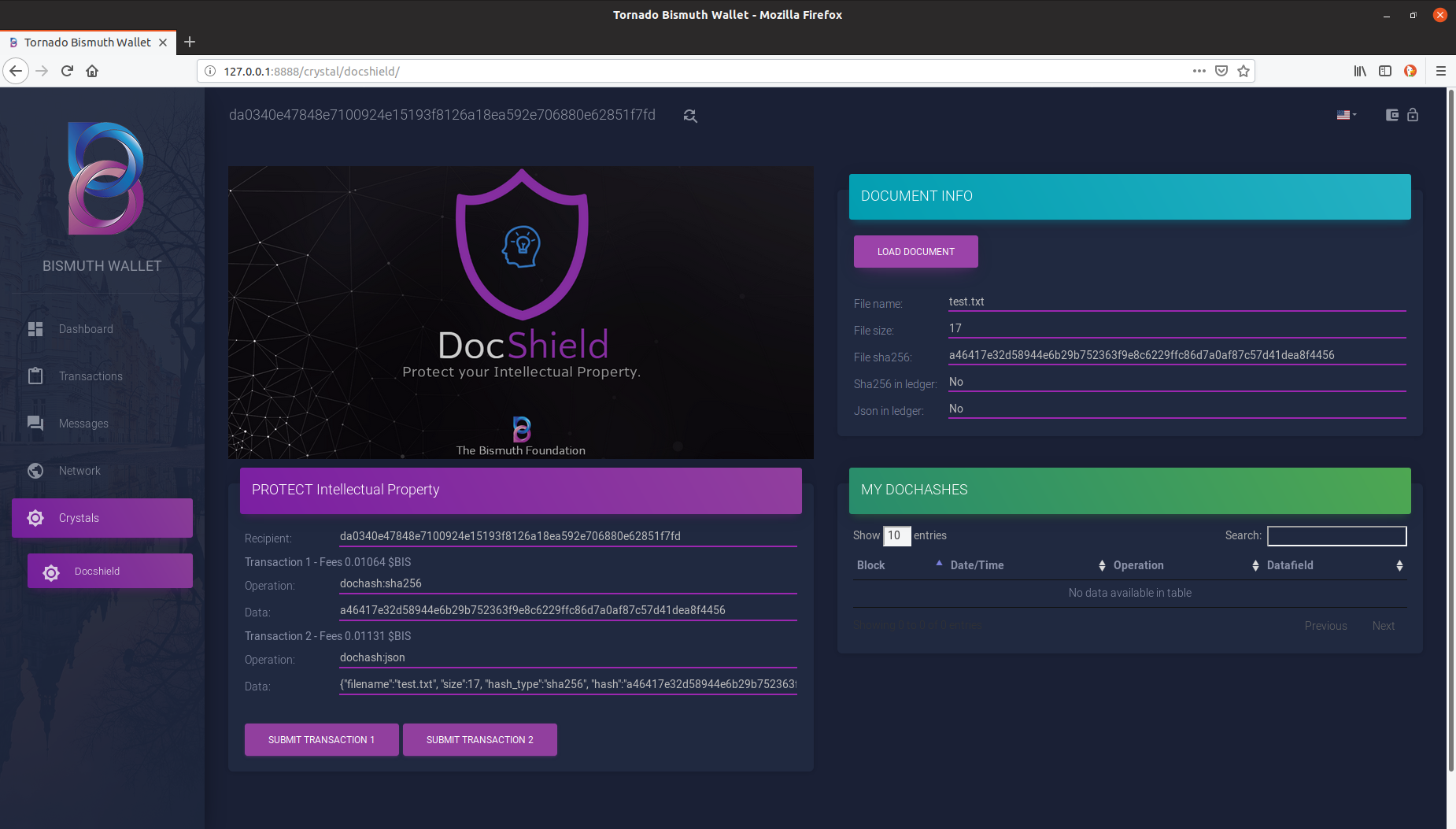 The docshield crystal checks if this document hash has already been submitted to Bismuth blockchain, either as a pure sha256 hash or as a JSON description. If the document hash has not been submitted to the blockchain before, it can be submitted either by clicking on “Submit Transaction 1”, which submits only the pure hash, or “Submit Transaction 2”, which submits more information as a JSON string. It is recommended to submit both transactions to the blockchain.

After your transactions have been included in the blockchain, click on “Load Document” again and select the same file, see screenshot below. 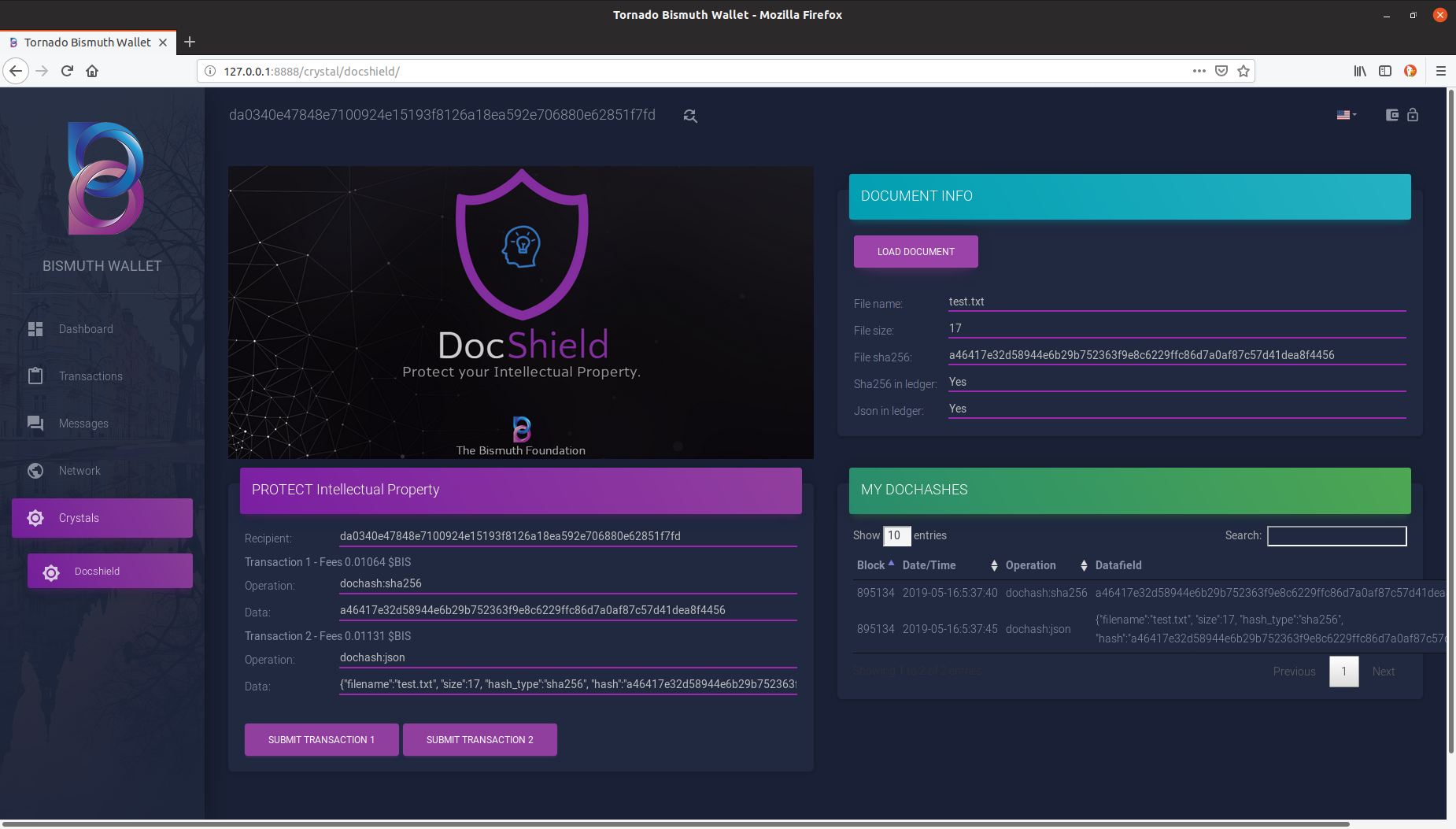 The two fields “Sha256 in ledger:” and “Json in ledger:” will now both say “Yes” and the “My Dochashes” table will be populated with your DocShield transactions.

To double-check if your transactions have been properly included in the Bismuth blockchain, the public website for the crystal can be used:

This website links to one of the Bismuth blockchain explorers:

To find your transactions, search for your account address in the blockchain. After the transactions have appeared (the average Bismuth blocktime is 60 seconds) these transactions will contain the proof that you were in the possession of the corresponding documents at the timestamp shown in the block explorer. If a future dispute should arise regarding your intellectual property, the blockchain explorer and your account address would be the tools to use in your defense.