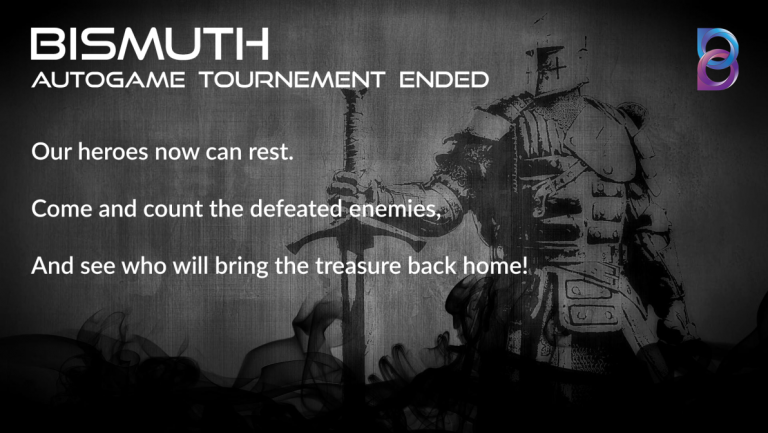 20 Months after its mainnet launch, The Bismuth network reached the 1 000 000 blocks milestone.

As a celebration of this event, we ran a free to play tournament, on top of the Bismuth Chain itself.

Total prizes were 2500 BIS, here is what happened…

Autogame is a new game concept by HClivess, Bismuth founder and core dev.

Here is how he describes it:
Autogame is a deterministic semi-autonomous computer game with RPG elements everyone in possession of Bismuth can participate in. […]

Progress in the world is linear, block by block and transaction by transaction. […] Each game ultimately ends in player’s death. The player who survives the longest takes the top spot in the high scores table.

Let listen to the Herald…

Hear, Hear!
The time of peace is over, the freedom we lived in for the last 1005500 Blocks is in danger. Evil forces are rising and knocking at our gates. WE NEED YOUR HELP, from all of you.
We need the fastest, the bravest, simply the best warriors to protect our Chain and to defeat the monsters lurking around the dark passage that is in front of us… and gladly you came!
Of course, there is not only fame to gain, the finest warriors will also be paid from our reserves. We will give away our finest treasure, our BIS.

After 1500 new Blocks you all did great, numerous hordes of evil stood against you, but you defeated them.
81363 steps were taken through the dark, heading to the light of a bright future for us all.
You defeated 2544 Berserker, 3829 Goblins, 5806 Trolls and 74 Dragons.

To our all surprise, our wise man saw it in his dreams, a frowning face, hardly recognizable, just whispering one word: RAGNAROK.
First, we did not believe it, but reports of you confirmed our worst nightmares.
RAGNAROK is real and it summons even deadlier enemies than we ever faced before. But you all can stand against them. You prooved that you are able to!
You already killed 447 Dwarves and 16 Fenrir!
Nothing can stop you!
Hail to our mighty warriors!

Unfortunately, we had some heroes with bad luck. They faced a great dragon or the unbelievable Fenrir and did not survive.
9 Warriors got killed by a dragon and 14 were slaughtered by this demon we all know as Fenrir.

Do not retreat, you warriors of the chain!

These creatures did not make it easy for the chain warriors:

160 Matches were played over the week.
Every address was able to play up to 5 times.
For each address, the game with the most experienced player was kept
Addresses were then sorted by experience, and here is the top 10:

We’d like to thank all the players for giving this all new blockchain game a try, and providing us valuable feedback.

It would seem the game was pretty enjoyable to play, and you already are asking for more tournaments.

You can be sure Autogame will evolve and be back soon, better than ever!