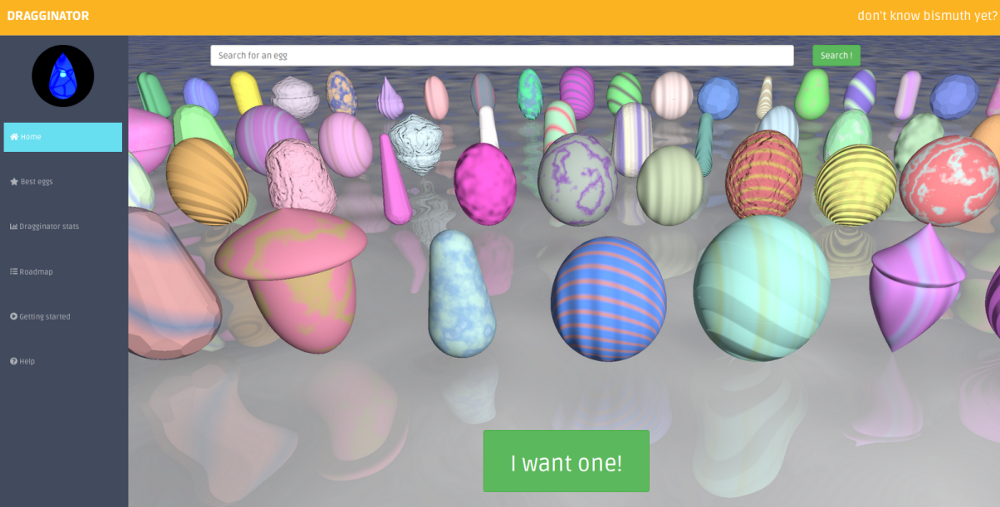 I follow — and support — Dragginator.com from the start, and like everyone I think, I was wondering where it was headed, since nothing new seems to take place on the website. I had quite a lengthy chat with Iyomisc that I — EggdraSyl from the Bismuth Foundation — reworked as an interview:

Iyomisc, can you begin by telling something about yourself and your background?

I am a Python loving student and I like to learn new computer languages. I consider myself a geek, and I’ve always been interested in magical and extraordinary creatures, like dinosaurs and dragons 😉

How did you know about Bismuth in the first place?

I like logic puzzles and was learning Python at that time. I heard of blockchain, saw that Python blockchain named Bismuth and I began to dig. After some discussions in private with you (EggdraSyl) I grasped the potential of the thing and wanted to do something myself with it.

That’s when dragginator was born?

Exactly. I had that idea of on chain DNA that would encode physical properties or abilities of some creatures. I thought of a simple “protocol” to have that run on Bismuth. That was the easy part.

What was the hard part, then?

On the technical side, the texture and 3D renderings, from a given DNA, were a real challenge. (That’s also why they are born as eggs, simpler to render at first than complex creatures) That’s what took most of the initial dev time. The Bismuth interaction was a breeze. Just needed a custom plugin and the no_gui utils that I reworked to improve and adapt to my needs.

Other parts are hard?

The communication is not my thing. I can write code more easily than promotional stuff.

Haha 🙂 That seems to be a common issue among Bismuth devs. We code more than we document or publicize what we do. But you got some help on that?

Yes, You and the Bismuth team help a lot to spread the word and motivate. Also I have to give a special “thank you” to Damian from the discord who did an awesome job writing articles and doing many videos about dragginator and the cups and all the events. I really think he made a difference, awesome job! Then I also liked a lot all the feedback from the users on twitter and the discord. It’s a source of motivation. 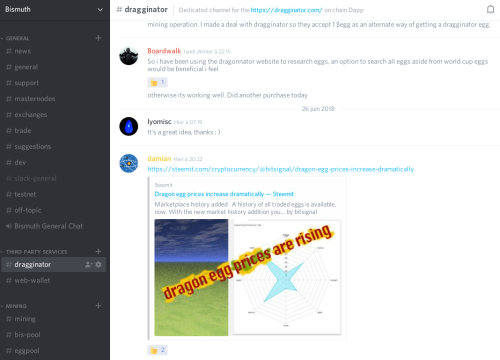 For the newcomers, can we recap the current features of dragginator? Because, some users are wondering where you are heading, but we should not forget all that is already working. It’s both an amazing collecting game for now, as well as an awesome showcase of what Bismuth allows to build upon!

Yes! Dragginator is a collectible game where you get draggons eggs. You can buy a draggon egg with $BIS or with a Bismuth $EGG token.

Every draggon egg is unique, and comes with its own DNA. The DNA encodes all kind of things, for instance: the type of the egg, its precise shape, its colors, its effects, surface bumps, but also its element (earth, fire, water, air). Then the capabilities of each egg also are encoded in its DNA: speed, health, bravery… 8 capabilites in all. Also, some eggs are more rare than other, or stronger. So each egg is unique, and each one can have a “value”. Once you bought a dragginator egg, you get its complete profile, with a 3D rendering of the egg. You then can do many things with them.

You also made special eggs at some point?

You can see them on the rarest eggs page https://dragginator.com/best.php I also did soccer eggs during the soccer world cup. Those eggs were balloon shaped, with the flag of the countries, and they could enroll in a dragginator soccer cup. 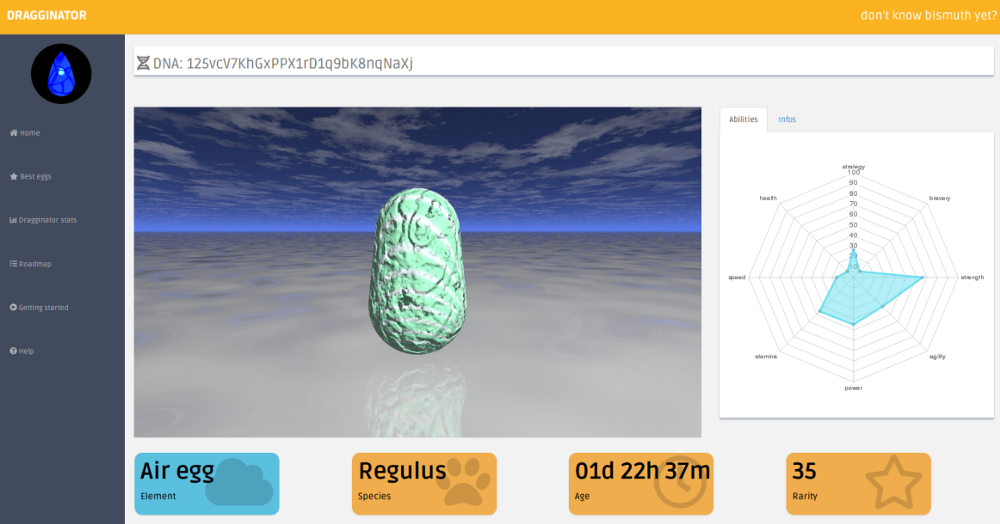 Two cups were run until now I think, one with soccer eggs, and one with regular eggs?

Other currently working features we forgot?

Wait, that’s huge… you mean your eggs are tradeable in an automated manner, with no risk for the seller nor the buyer? That’s a very nice use case of Bismuth, and proof that it works pretty well. Please, go on.

Yeah, I remember that. You merge two eggs and get a new one, with new characteristics. The feedback were mixed on that one.

Some users did not understand how it worked, and I didn’t want to make too easy powerful eggs, but the most powerful eggs are now merged eggs, and the eggs winning the last cup were merged eggs, so definitely, it works and you can improve your eggs that way, if you take time and experiment how it works.

So, now to the point. Since a few months, we did not hear of dragginator, no more cups, no new feature was announced. Did you drop dragginator? We are wondering!

Not at all. Like I said, communication is not my thing, and I see that is an important part because when there is no article and no user feedback, the game looks unused, whereas it still works and is I think a great showcase for Bismuth. I don’t have the competence or the will to do social media campaigns and such. I hoped the community and the dragginator users would do, but apart from a few, it does not come alone. Then, I had the impression with the last cup that users wanted something else. The first eggs were a huge success, so was the first cup, but then things slowed down, like it was not enough, or deja vu, and the users wanted really more.

I think we all are expecting our eggs to hatch and give birth to dragons.

Yes, and it’s on the roadmap.

But you saw cryptokitties or other such games: you are quickly limited. I could hire a graphist to draw some 2D sprites of dragons with some features to make them sort of unique add a hole in the wing, change eye color, add a spike here or there… but frankly, that’s not what I would expect myself. I wanted to do something really new. The core mechanism already is there and working, there is no more to prove here.

Yes, you certainly proved that Non Fungible Tokens on top of Bismuth were possible, with advanced features we can’t find elsewhere, like the merging. Maybe this fact is not known enough. That’s a huge breakthrough by itself. So, what do you have in mind?

My goal is to go toward a complete virtual environment where your draggons live. I don’t want just a static picture of an egg or of a crippled draggon. I want them to be alive — or close.

Wow! That certainly is a challenge. But are you not afraid to lose your supporters with long dev times?

I do not communicate a lot, but I do work and dev. I will use any help you can bring on the social and communication side, but that’s something I can’t do alone. My thing is the dev, and I had several tough technical challenges to solve for the next big step. So, whatever the users think, I did not abandon the dev, and spend my free time on it.

Ok, so, any goodwill will be appreciated, and if you can help with the social or marketing side of dragginator, please contact Iyomisc. You spoke of technical challenges. Did you solve them?

I did. Let say it, the next thing dragginator will show is a 3D interactive game. It’s more a proof of concept than a “real” game, but it was a necessary step to validate all the technical points.

What are those points?

At what stage are you now?

All technical things are now solved, and the first game is almost ready. I think it will still need a few weeks to complete.

Do you plan other “regular” features in the mean time? Another cup?

I don’t think so. Unless there is some new social activity around dragginator, I think there would be no interest in a new soccer cup.
Maybe I’ll add a new feature for BIS newcomers, I’ll see.

Thanks a lot for the chat Iyomisc. Eagerly waiting forward that first 3D game then, and I must say I feel a little culpability for not advertizing dragginator those last times. I was pretty busy with BIS core code and did not do any social stuff myself.